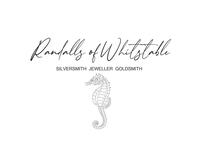 THE JEWELLERY-MAKING VENTURE
OF A FATHER, HIS DAUGHTER AND THEIR DOG...